Wish someone would explain you the logic behind Spanish conversations? Wish you wouldn’t have to deal with 1000s of flashcards? Been learning Spanish but still feel you cannot talk to a native? Stop mugging up Spanish! Start conversing!

Say ¡Hola! to the simplest and the most logical way to learn Spanish.

The audio-visual lessons are organized in three pit stops:

The first leg of the voyage will get you rocking on the most essential conversations in Spanish. You will master Spanish greetings, and will be able to introduce yourself in Spanish, ask for introductions, communicate about the languages you speak, and about your understanding of the new language. 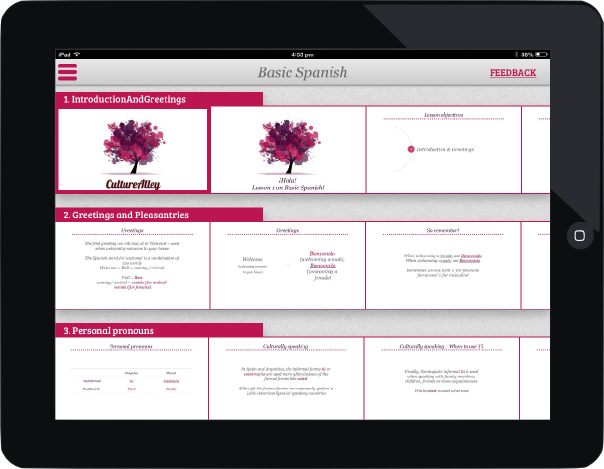 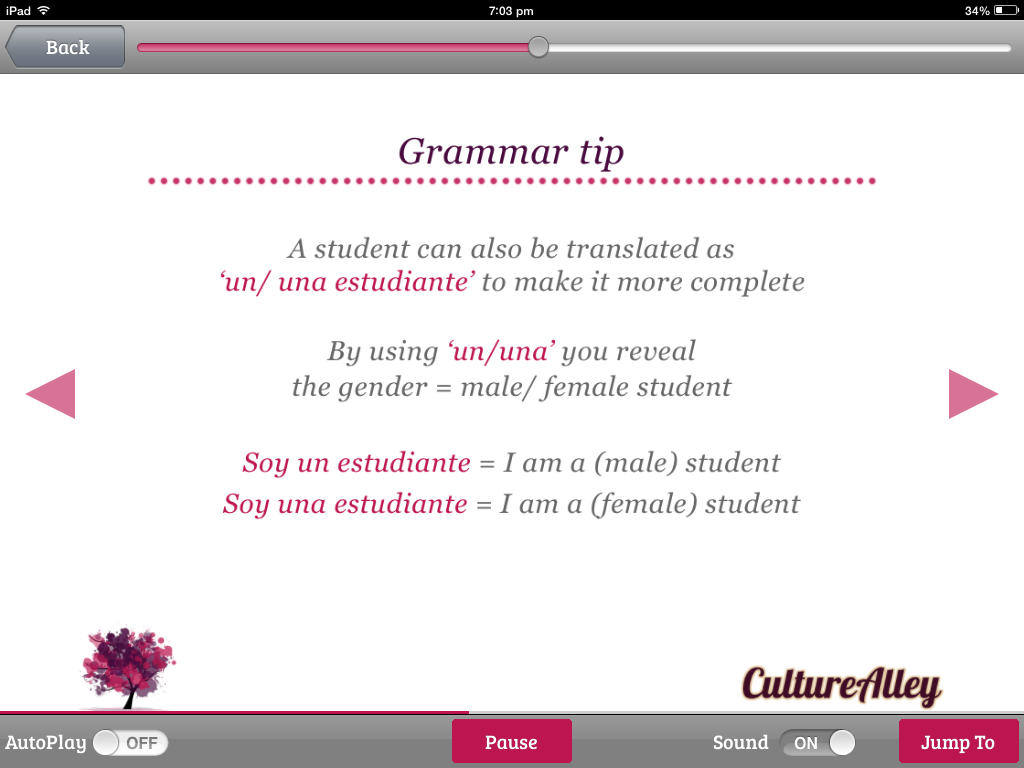 As you build upon what you went through in Leg 1; Leg 2 gets more exciting! It helps you in mastering some difficult conversations. You will learn how to make new friends, meet new people, talk about family in Spanish, talk about pets, and more. This part also covers some must-learn topics like basic numbers in Spanish, articles, asking & telling time in Spanish, telling the date, taking about age and birthdays etc… 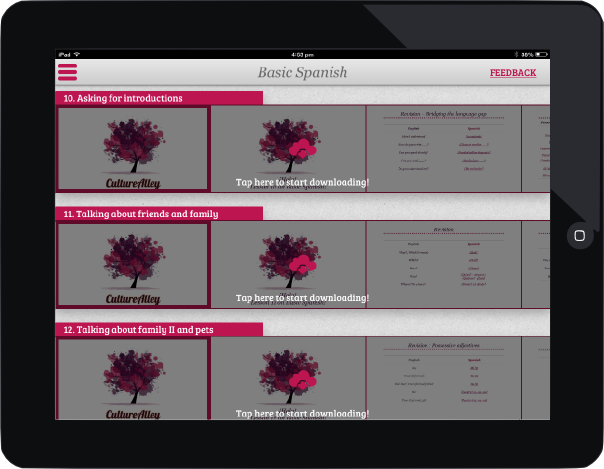 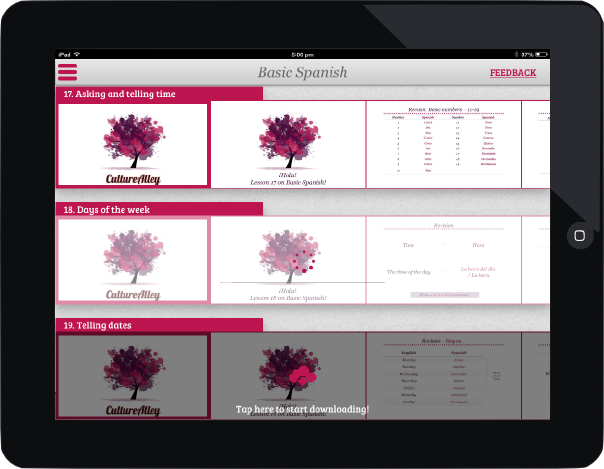 Leg 3 gets you all set to have advanced conversations. Travel to Spanish speaking countries, ask for directions, communicate in emergency situations, describe people, discuss hobbies, and more! It also gives you a dose of some essential Spanish grammar to help you frame your own conversations! You will learn how to compare and grade things, and learn more about essential concepts like gender and singular-plural, to give you the confidence to rock Spanish like a native! 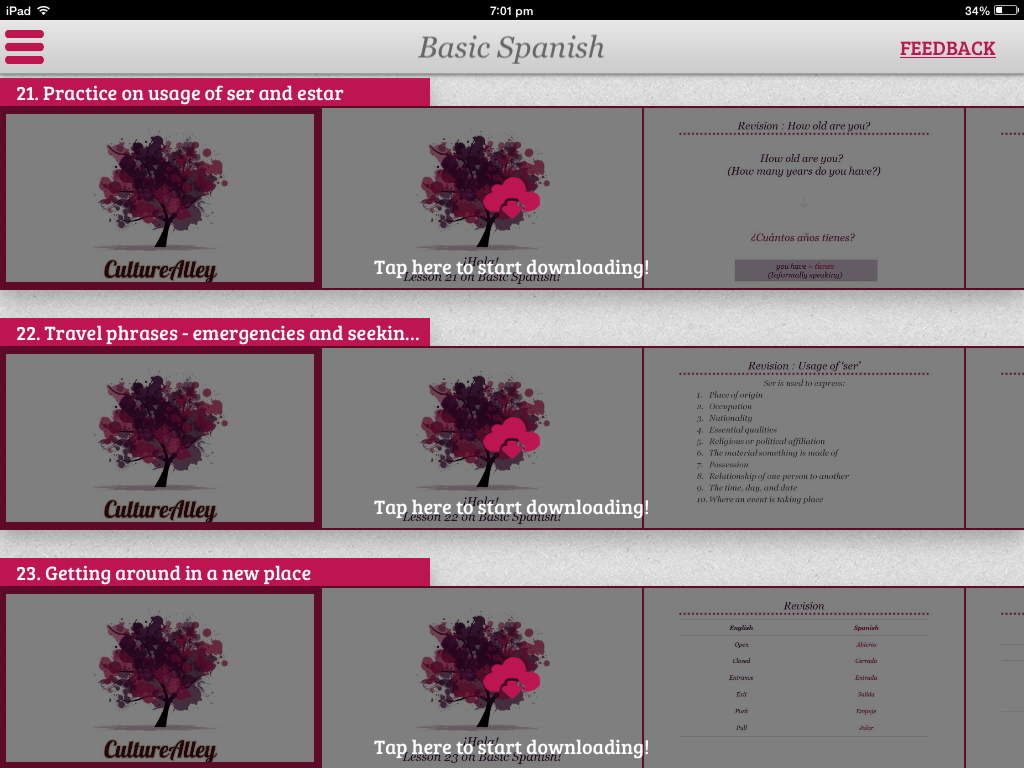 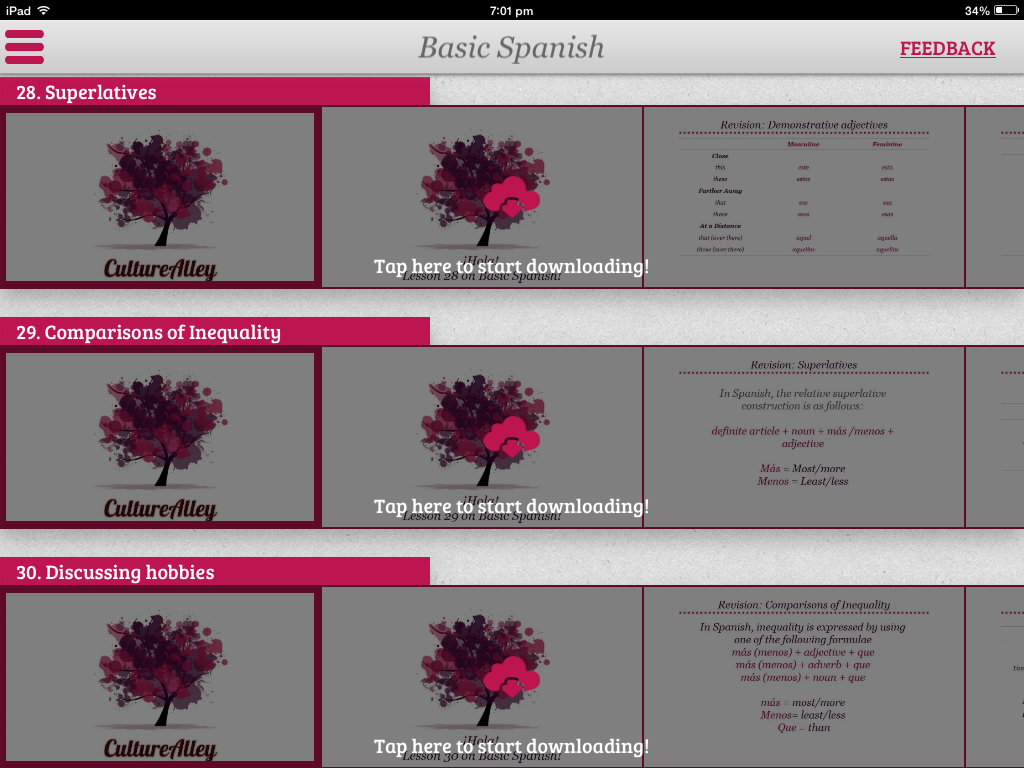 So what are you waiting for? Kick-off your Spanish voyage, today!

The CultureAlley Spanish App for the iPad is available for free download on the App Store.

What not to capitalize:

Nationality: In Spanish, even though names of countries or cities are capitalized, words derived from them – such as nationality and language are not capitalized.
Example: I am American =  Soy americano

Languages: Similarly, names of languages are not capitalized in Spanish.
Example: Do you speak Spanish = ¿Hablas español?

Unless the word comes as the first word of the sentence, we never capitalize names of ‘days of the week’ in Spanish.

Names of months: Names of the months of the year are not capitalized either.
Example: Today is May 5th = Hoy es el cinco de mayo

Introductory titles: Titles (such as doctor, profesor, señor) are not capitalized in Spanish. However, common abbreviations (like Dr. for doctor) are capitalized.

Place names: Names of rivers, lakes, mountains etc. are capitalized, but the identifier (type of place) is not capitalized.
Example: In English we would usually say ‘I am going to see River Nile’. In Spanish, it would become ‘Voy a ver el río Nilo’. While we capitalize ‘Nile’ or ‘Nilo’ we do not capitalize ‘River’ or ‘río‘.

Religions:
The name of most religions, their adjectives, and their adherents (proper nouns) are not capitalized in Spanish.
Example: Christianity = el cristianismo
Christian = cristiano
Muslim = musulmán

Ordinal numbers: When an ordinal number is used after a name, it isn’t capitalized.
Example: George the eighth = George octavo.
Note that we also skip the ‘the’ in such cases while translating to Spanish.

Hope these rules will help you write Spanish better!