At CultureAlley, we are working hard to make language learning the most effortless, and delightful experience for you!

So we thought, what if we could let you learn a new language while you do what you love the most – like browsing Facebook or playing games! Sounds crazy?

Presenting a whole New Culturealley for you: now you can learn Spanish while you browse your own Facebook feed and play games! 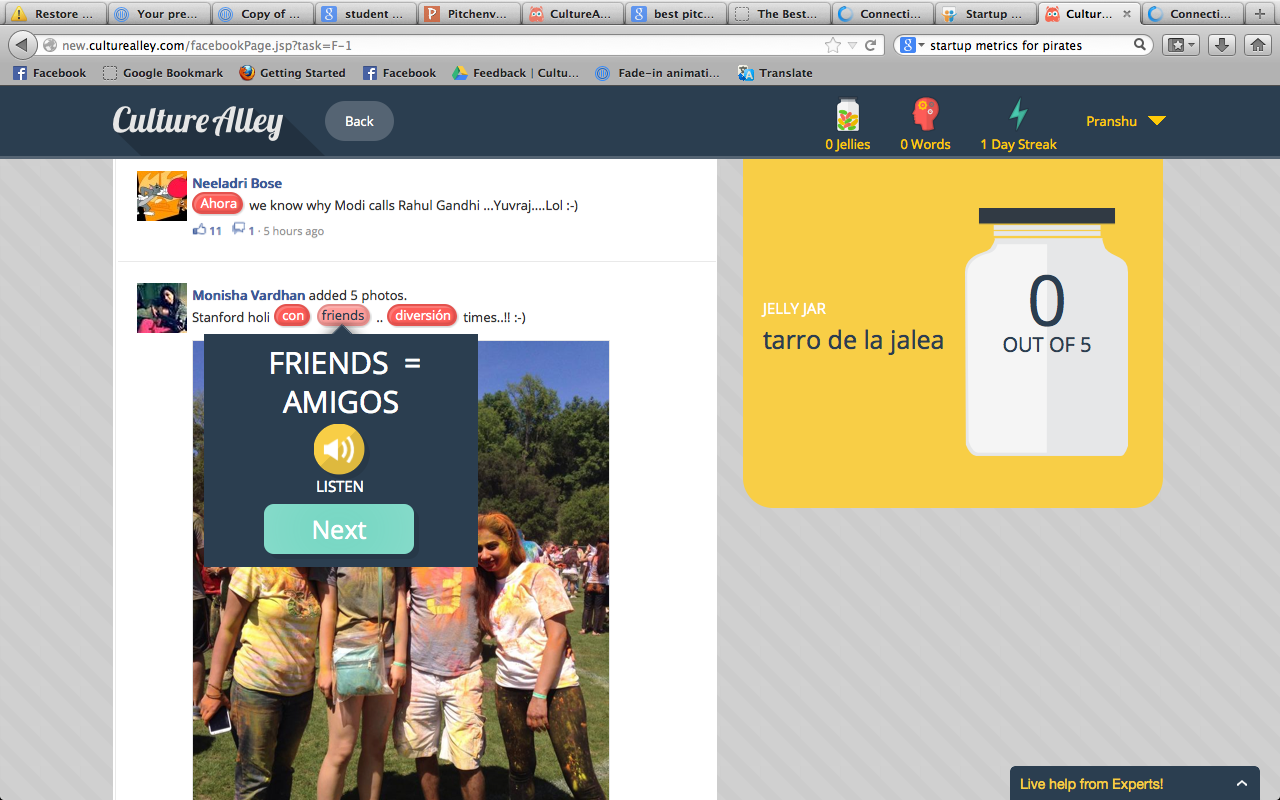 What happens at the Alley?

1. Learn Spanish while browsing Facebook : Now you can learn Spanish from your Facebook wall. While you browse Facebook we progressively replace  words from your feeds into Spanish.
Amazing, Isn’t it? 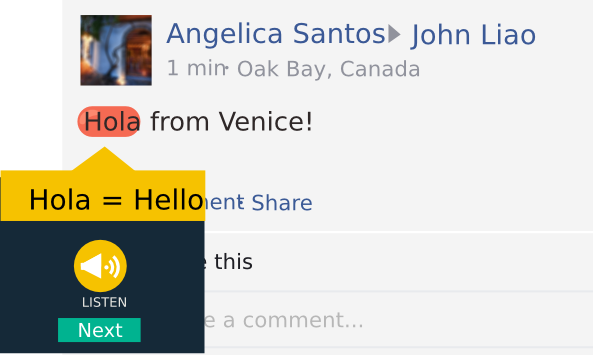 4. Play games, have fun : Our fun games – Taco and Sangria will make you remember everything you learn while you have fun! 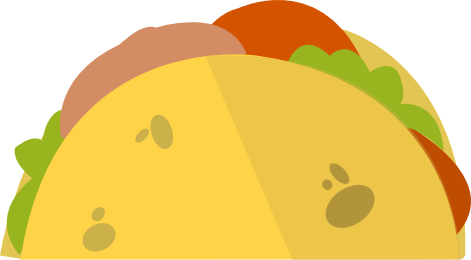 What are you waiting for?
Fill up that jelly jar and master Spanish while doing what you Love! 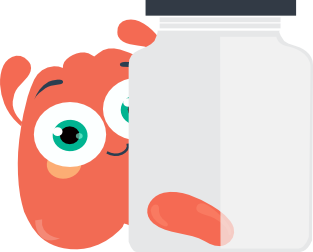 What are you waiting for? GET STARTED NOW

Sorry for being away for a bit. We’ve been working hard (dark circles and all that!) to make CultureAlley more awesome for you

We’ve added a lot of new features off late: many more free lessons, new interactive games, 16 new audio dictionaries, Q&A Forums, and Live Chat! We also launched an iPad App for Spanish and one for Mandarin Chinese with offline lessons.

You’ve loved all of these, and now we bring you all the things you love, on a brand new interface.

Say hello to a sleeker-faster-simpler CultureAlley

Your personalized dashboard will feature the next suggested lesson for you, a list of all the other lessons you can take, your profile, and a personalized word list.

Getting into the lesson experience:

1) CultureAlley will remember the lesson you last left off on, and show you the same the next time you come in

2) All the lesson topics are organized at the bottom

3) The lesson will open up in a beautiful full screen mode. Your games will work within the lesson experience. No clutter. Woohoo!

We welcome your suggestions, comments, and feedback on the new look

Meanwhile, we’ll continue to make your experience at CultureAlley even better!

A lot of our learners requested that, whenever they login, CultureAlley should remember where they last left off, and let them start from there.

We did some magic and made it happen! Now, whenever you login to CultureAlley, you can ask it to take you back to the lesson you watched when you were last logged-in. 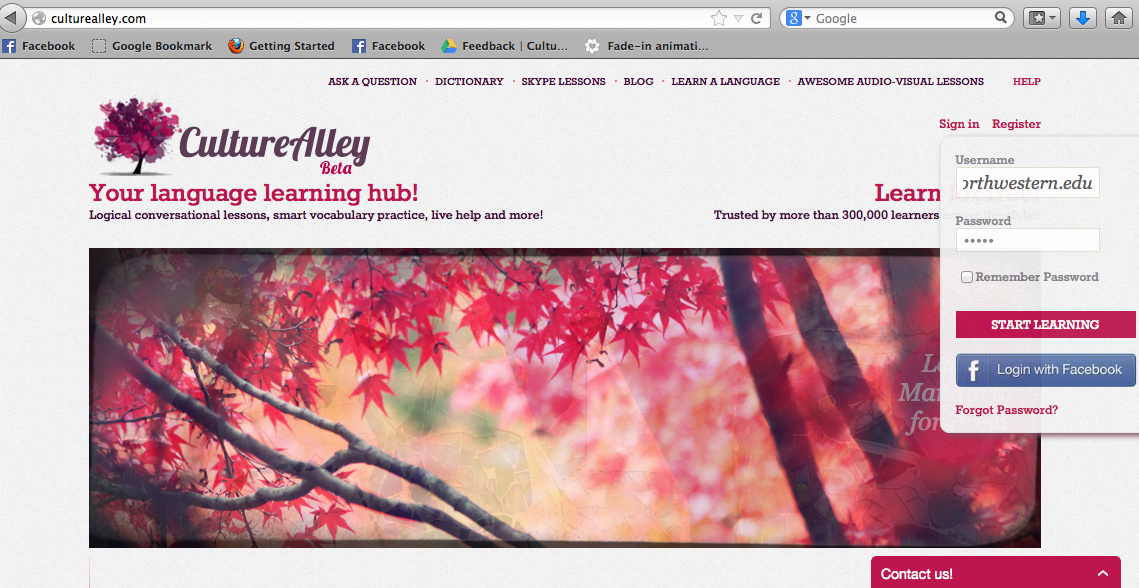 CultureAlley’s smart bookmarks will remember where you left off and take you back to that lesson when you log-in next. 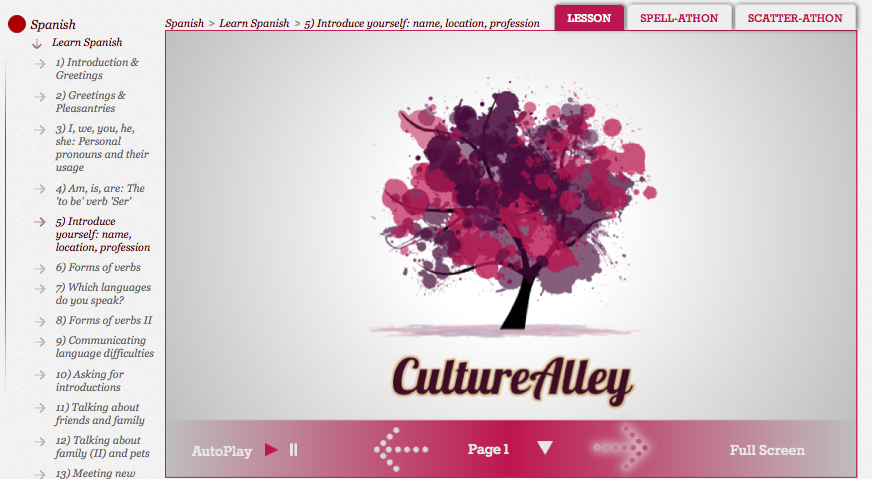 You asked for it, and we have it!

A lot of our learners asked us if they could print or download the notes of the online lessons at CultureAlley. Printable notes can be helpful in revising what you have learned through the audio-visual lessons, even when you may not be connected to the internet.

CultureAlley now gives you an option to print the notes for each lesson.

Below your lesson window, you will now be able to see an option called ‘Printable version’ 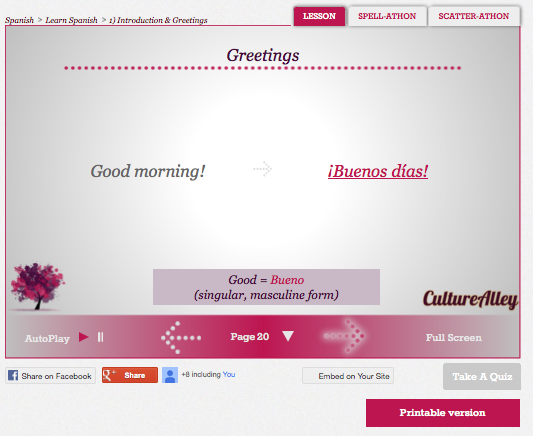 When you click on this option, a new tab will open up with the printable version of your whole lesson. 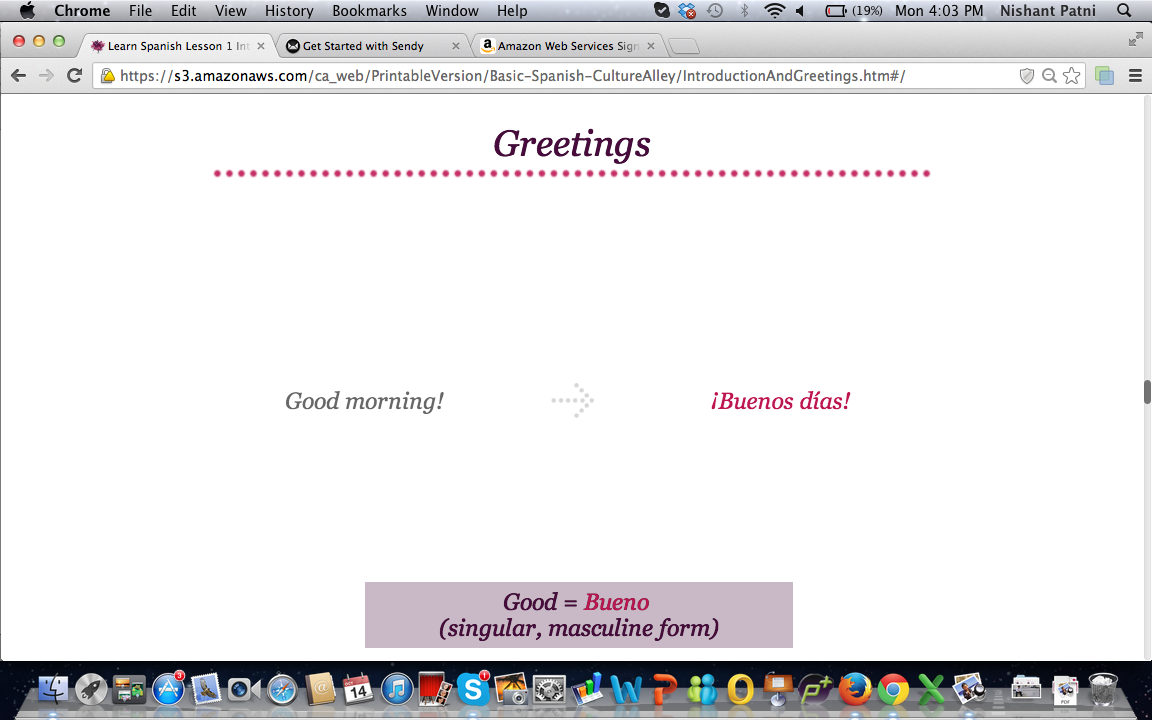 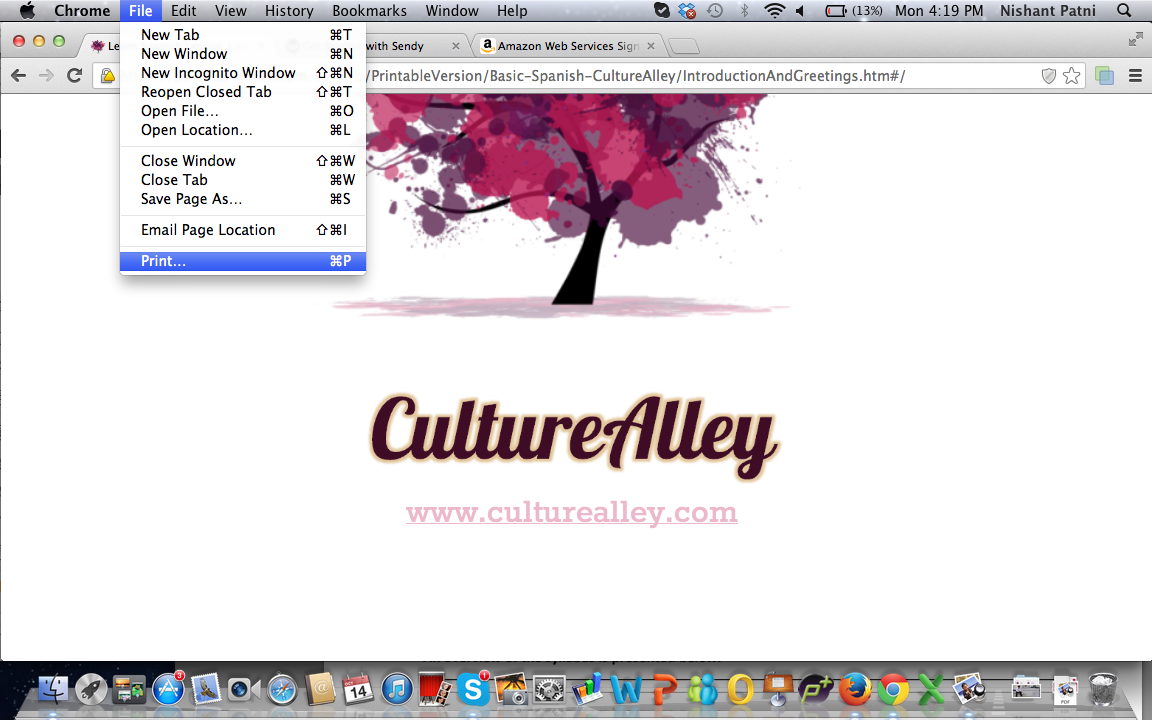 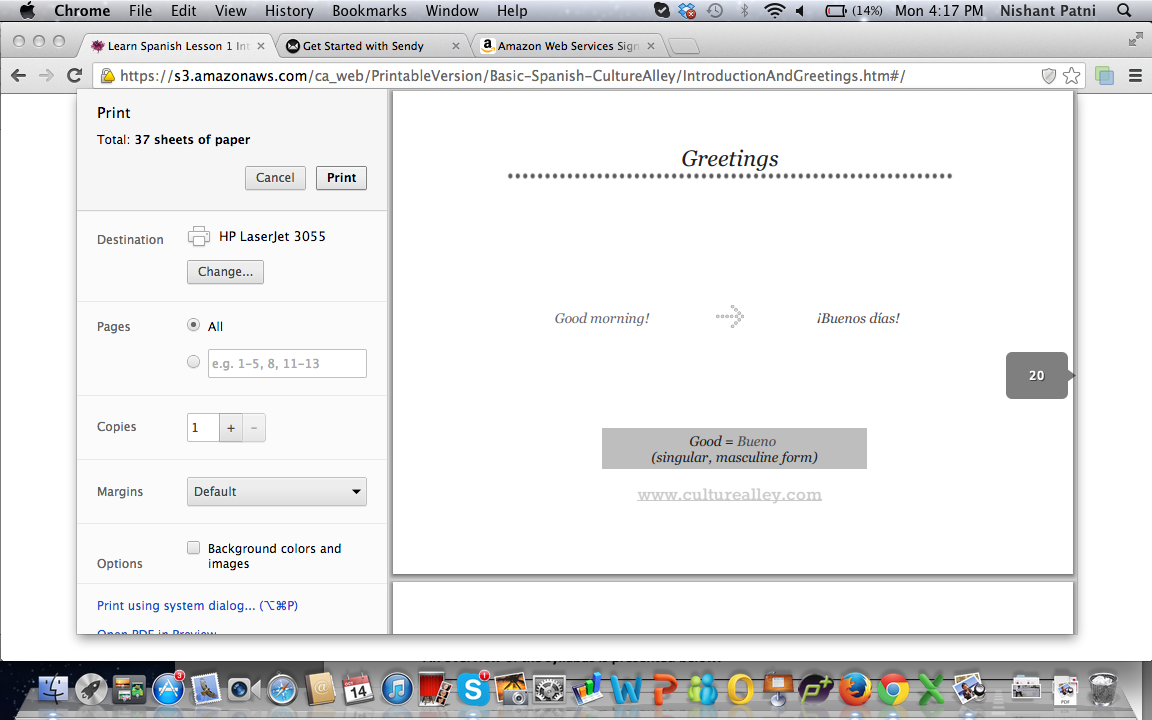 That’s it! Run to your printer – your notes are ready!

We will also allow downloading the lesson notes as a PDF very soon! Keep watching this space!

How learning Spanish made Daachi Halima a special girl!

We get a lot of comments, questions, and feedback from our learners. These go a long way in helping us evolve CultureAlley and make it a better, more enriching experience for all our learners. Every month, we will feature one of our students, who stands out as a true language learning star!

Here is Daachi Halima’s story, in her own words – one of the most heart warming stories we have read so far!

Name: Daachi Halima
From: Algeria
Born: 1989
Profession: Earned a diploma in English language and working in a cultural center.

The things that I like (my hobbies) are: I love reading books, writing poems; novels; and short stories. I also like to draw Anime! I like watching Korean and English movies.

The reason why I started learning Spanish is that when I was studying in the University, we were studying about the American civilization which contained the history of Mexico; and we studied about Santa Anna. During that time I started liking Spanish. Then, I started looking for sources to help me learn some Spanish.

I asked my colleague to teach me some Spanish – she used to just give me some words and then laugh at me because I didn’t understand the meaning. Then, I looked for a teacher but I didn’t have enough money to carry on with my studies in the university and learn Spanish in parallel because it was too expensive.

I didn’t give up, and I continued looking for sources for learning Spanish for free – I looked for two years!
I was looking on the internet too but all that I found was forums with short trials. And on some forums which were free – the narration was so fast that I never understood anything!

Finally, I found CultureAlley which was really amazing. Teaching everything so well and slowly also with practice – all of that for free! The most amazing thing is that they are available to chat with their learners kindly.

My language learning journey has been so good. With CultureAlley, I can take two to three lessons each day at my own pace because I’m busy with work and I don’t get much time to learn at one go. I like to practice each Spanish word that I learn every day. I practice it with my sister and brother too – I’m teaching them everything I know about Spanish – at the same time this makes me revise my lessons with them.
I have a mobile dictionary Spanish -> English that I keep with me too.

Learning Spanish has made me special girl!

It has made me want to learn more languages; as I said before, I’m working at a cultural center; this place is suitable for learning.

I have started teaching English in my village and my students also want to learn Spanish because sometimes I talk to them in Spanish to make them get a flavor of it.  Most of the people in my village don’t have enough information about foreign languages and how interesting they are.
I want to learn all languages that are available at CultureAlley – I hope they’ll offer French soon because it is the Second language in Algeria. Also I’d like to learn Korean because I like to watch a Korean movies. I want to learn English better. And Hindi too – because sometimes I sing some Hindi songs but I always wonder about the meaning and about my pronunciation.

CultureAlley has helped me a lot in learning Spanish because of the way of teaching that they adopt. For me, as an Arabian girl, I benefit from both sides. I practice my English by listening to the narrator and learn Spanish slowly and perfectly! Specially with practice! I also love the cultural leaf!

I want to tell all learners that if you want to learn a new language – you can! All you need to learn a language is to have some will. The reason to learn languages is not important – if you have a noble aim then God will help you for sure.

It has been a few months since we launched CultureAlley’s beta and what a ride it has been! We have seen the highs and lows, but the one thing that has been constant is the love from our learners.

) and we are overwhelmed with your support. While making the product and the interface better and more engaging for you is our top goal – we want to stay connected with you, share our story, and hear yours too. Over 200,000 people have studied at the Alley – Starting a blog is just a tiny step to connect with them and hopefully thousands more in the future!

CultureAlley follows a simple rule while hand-crafting each lesson for you – we break down each concept into the most intuitive unit so you don’t have to ‘remember’ a phrase but understand how it is constructed. We want to enable our learners to have conversations – not become a phrasebook!

Here’s what our learners say and what keeps us going:

“Spent a year trying to figure Spanish out. 4 years later I have decided to try again and came across CultureAlley. Wish this was available 4 years ago, I would’ve carried it on. Thank you this is an amazing lesson!”

How do we do it?
We work with teachers, native speakers and students from across the world to develop our content. The content is highly conversational based on real situations one might need to use the new language in. It has just enough dose of grammar to get you going to frame your own sentences.

We realize vocabulary is important – but too much and you are lost in the world of flashcards! Our lessons cover just enough vocabulary to help you converse in real life contexts and become familiar with natives. Here’s a comment we received recently:

Once you master the concept and the context, we give you additional vocabulary separately as a reference and as per your learning needs.

The practice is action packed and understands where you err. It makes you re-do and revise just what you don’t get.

We are constantly working on adding many more innovative features to make language learning fun, engaging and an experience you’d want to go through again and again.

More to follow. Till then, See you at the Alley!