This week featuring one of our young, enthusiastic Spanish students – Jake Pagala. Jake tells us about his keen interest in Spanish thanks to his ancestral roots and how he is going about learning it! Here’s Jake’s story: 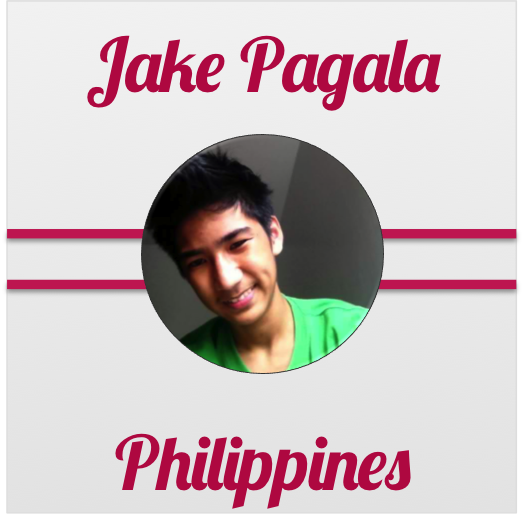 Hello! I’m Jake Pagala, a high school student from the Philippines. I am 14 years old.

I love to sing, dance, play badminton, and most of all learn a new language!

I decided to  take up Spanish because my grandpa is a Spaniard.  I really want to talk to him in Spanish and learn about the culture from him.

I also want to start communicating with my cousins who speak Spanish. This will bring me closer to my extended family. I am sure they will be delighted when I talk to them in Spanish!

I study here at CultureAlley for about 2 to 4 hours every day.  I cannot believe the  number of new words and phrases that I have picked up thanks to their clear lessons! The thing to remember is to learn regularly and practice.

The live chat helps me a lot because they answer my questions quickly and are always there anytime I need them. I was so excited to find out that a lot of other Filipinos are learning Spanish on CultureAlley too!
Learning Spanish helps me a lot. Some of my friends here know Spanish and because I’m studying Spanish, I’m able to understand them better now.

The best part is – these days when my classmates need help in Spanish grammar – they always ask me!

Since this site is so great I plan to study Mandarin Chinese and Punjabi on this site too!
If you are studying here on CultureAlley then keep it up and you won’t regret it – I promise!
Jake Pagala

How learning Spanish made Daachi Halima a special girl!

We get a lot of comments, questions, and feedback from our learners. These go a long way in helping us evolve CultureAlley and make it a better, more enriching experience for all our learners. Every month, we will feature one of our students, who stands out as a true language learning star!

Here is Daachi Halima’s story, in her own words – one of the most heart warming stories we have read so far!

Name: Daachi Halima
From: Algeria
Born: 1989
Profession: Earned a diploma in English language and working in a cultural center.

The things that I like (my hobbies) are: I love reading books, writing poems; novels; and short stories. I also like to draw Anime! I like watching Korean and English movies.

The reason why I started learning Spanish is that when I was studying in the University, we were studying about the American civilization which contained the history of Mexico; and we studied about Santa Anna. During that time I started liking Spanish. Then, I started looking for sources to help me learn some Spanish.

I asked my colleague to teach me some Spanish – she used to just give me some words and then laugh at me because I didn’t understand the meaning. Then, I looked for a teacher but I didn’t have enough money to carry on with my studies in the university and learn Spanish in parallel because it was too expensive.

I didn’t give up, and I continued looking for sources for learning Spanish for free – I looked for two years!
I was looking on the internet too but all that I found was forums with short trials. And on some forums which were free – the narration was so fast that I never understood anything!

Finally, I found CultureAlley which was really amazing. Teaching everything so well and slowly also with practice – all of that for free! The most amazing thing is that they are available to chat with their learners kindly.

My language learning journey has been so good. With CultureAlley, I can take two to three lessons each day at my own pace because I’m busy with work and I don’t get much time to learn at one go. I like to practice each Spanish word that I learn every day. I practice it with my sister and brother too – I’m teaching them everything I know about Spanish – at the same time this makes me revise my lessons with them.
I have a mobile dictionary Spanish -> English that I keep with me too.

Learning Spanish has made me special girl!

It has made me want to learn more languages; as I said before, I’m working at a cultural center; this place is suitable for learning.

I have started teaching English in my village and my students also want to learn Spanish because sometimes I talk to them in Spanish to make them get a flavor of it.  Most of the people in my village don’t have enough information about foreign languages and how interesting they are.
I want to learn all languages that are available at CultureAlley – I hope they’ll offer French soon because it is the Second language in Algeria. Also I’d like to learn Korean because I like to watch a Korean movies. I want to learn English better. And Hindi too – because sometimes I sing some Hindi songs but I always wonder about the meaning and about my pronunciation.

CultureAlley has helped me a lot in learning Spanish because of the way of teaching that they adopt. For me, as an Arabian girl, I benefit from both sides. I practice my English by listening to the narrator and learn Spanish slowly and perfectly! Specially with practice! I also love the cultural leaf!

I want to tell all learners that if you want to learn a new language – you can! All you need to learn a language is to have some will. The reason to learn languages is not important – if you have a noble aim then God will help you for sure.